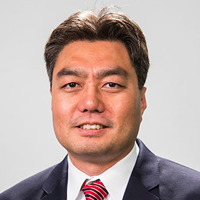 Henry Ahn joined the National Science Foundation in July 2016 as an SBIR/STTR Program Director. Prior to joining NSF, Henry managed seed-and early-stage investment programs for TEDCO for 12 years including the Technology Commercialization Fund, TEDCO’s flagship seed funding program for technology-based companies in Maryland. During his time at TEDCO, Henry was actively involved with various entrepreneurs and entrepreneur support groups as a guest speaker, an advisory board member, a judge, a mentor, among others. Additionally, Henry was part of the licensing and supplier relations team at a biotechnology company called Upstate, where he successfully negotiated, licensed and commercialized approximately 190 biomedical research reagents from around the world. Henry has also done approximately five years of research, mostly in the field of immunology (including graduate work). Henry has an MBA from Rice University, an M.S. in biotechnology from the University of Tennessee, Knoxville and a B.S. in biomedical engineering from Boston University.