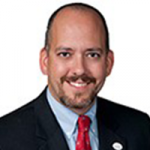 Before joining Emergent, Mr. Kirk worked at Merial, a multinational animal health company, serving in various positions from 1996 to 2001.

Mr. Kirk received both an M.B.A. and B.S. in Microbiology from the University of Georgia.